2 years ago
In the News 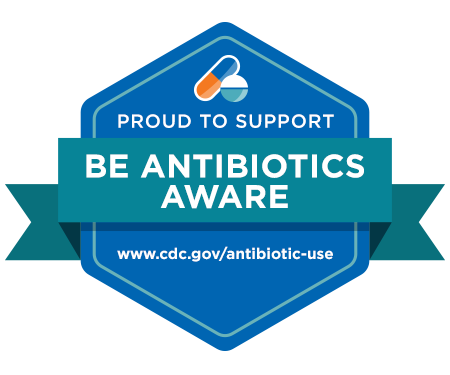 If you develop an infection, like strep throat or a UTI, you probably rely on your doctor to prescribe antibiotics to treat your condition. But what if there was nothing your doctor could do?

This scenario is not as far-fetched as it might sound. In the U.S. alone, more than 2.8 million people develop antibiotic-resistant infections each year and more than 35,000 people die as a result.

This problem is caused by the spread of antibiotic resistance.

What is Antibiotic Resistance?

According to the Centers for Disease Control and Prevention (CDC), antibiotic resistance occurs when microorganisms like bacteria and fungi change over time and develop resistance to antibiotic drugs. In other words, the germs develop the ability to defeat the drugs designed to kill them.

This resistance makes it harder to treat infections and increases the risk of disease, illness, and death worldwide. According to the WAAW fact sheet, without effective antibiotics, the success of modern medicine in treating infections, including during major surgery and cancer chemotherapy, would be at increased risk.

And globally, there has been an alarming spread of “superbugs.”

Superbugs are strains of bacteria, viruses, fungi, and parasites that are resistant to most medications. For example, a common strain of bacteria that causes pneumonia, Streptococcus pneumoniae (pneumococcus), has become resistant to one or more antibiotics.

This challenge is further exacerbated by a lack of access to quality antibiotics. There is a considerable need for new antibiotics but without change on our part, these new medications could become ineffective as well.

The WHO states that antibiotic resistance is a problem that’s accelerating globally. This increase is caused by the following factors.

The overuse of antibiotics in humans and animals is one of the biggest causes of this health crisis. Doctors will sometimes prescribe medications for things that don’t have a bacterial basis, like a cold or the flu.

Patients also will misuse antibiotics and fail to take medications as directed by a healthcare professional. Consumer Reports reviewed dozens of studies on antibiotic use and found some startling statistics.  In one study, half of parents admitted that they kept old prescriptions that their kids never finished and 73% of them then gave the antibiotics to a sibling or other unrelated child or adult.  The more frequently we use antibiotics, the greater the chance bacteria will become resistant to them.

The spread of COVID

The spread of COVID-19 could substantially increase the spread of antibiotic resistance. Many people are misusing antibiotics in an attempt to treat COVID. This strategy is largely ineffective since COVID is caused by a virus, not bacteria.

And finally, poor or insufficient sanitation practices in the U.S. and worldwide contribute to the acceleration of antibiotic resistance. Many countries lack access to clean water and sanitation in healthcare facilities. When facilities don’t have an effective way to prevent infections, drug-resistant infections will increase.

In the U.S., we have access to proper sanitation practices, but many people fail to use them. The average person will come into contact with over 60,000 types of bacteria a day, most of them are not harmful, but some of them can be.

Yet many Americans fail to implement the following proper cleaning procedures: 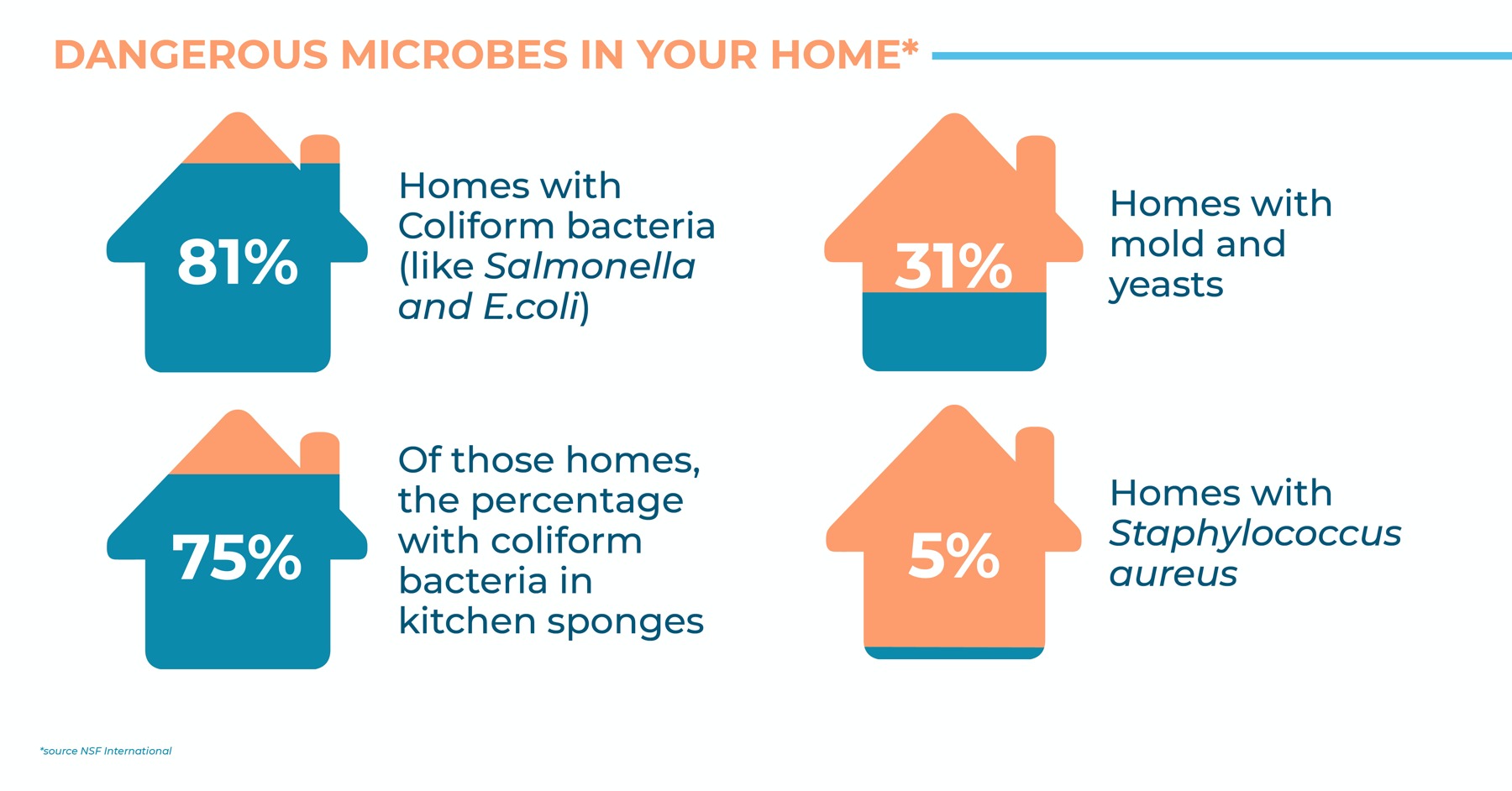 How to Combat Antibiotic Resistance

Antibiotic resistance is a serious concern that shouldn’t be taken lightly. However, there are tangible action steps we can take to combat this problem.

1. Track the data on Antibiotic Resistance

Government officials can help slow the spread of this growing problem by tracking the data on what causes infections and why people become resistant to certain drugs. These insights will give medical experts strategies on how to prevent antibiotic resistance.

2. Improve antibiotic use in humans and animals

There is a direct correlation between the usage of antibiotics and the spread of antibiotic resistance. According to the CDC, roughly half of the antibiotic usage in animals and humans is unnecessary and makes us all less safe.

Slowing the inappropriate usage of antibiotics in humans and animals would go a long way toward slowing the spread of resistant bacteria. So, don’t ask your doctor for an antibiotic to treat conditions that don’t have a bacterial basis, like a cold or the flu, and don’t share your antibiotics with anyone else.

Antibiotic resistance is a normal step in the way bacteria continue to evolve. For that reason, it’s important that we continue to develop new drugs and therapies to deal with resistant bacteria.

Bacteria becomes a bigger problem when there are gaps in our cleaning and sanitation habits. Invisible organisms can live on surfaces for months and grow at an exponential rate. And our current cleaning methods are often insufficient.

Using more sophisticated techniques can help slow the spread of microbes while making it easier to clean.  There are many new high-tech smart home solutions like touchless faucets and light switches, self-cleaning appliances like ovens and stay-clean humidifiers, and antimicrobial lighting that can continuously tamp down bacteria on surfaces. 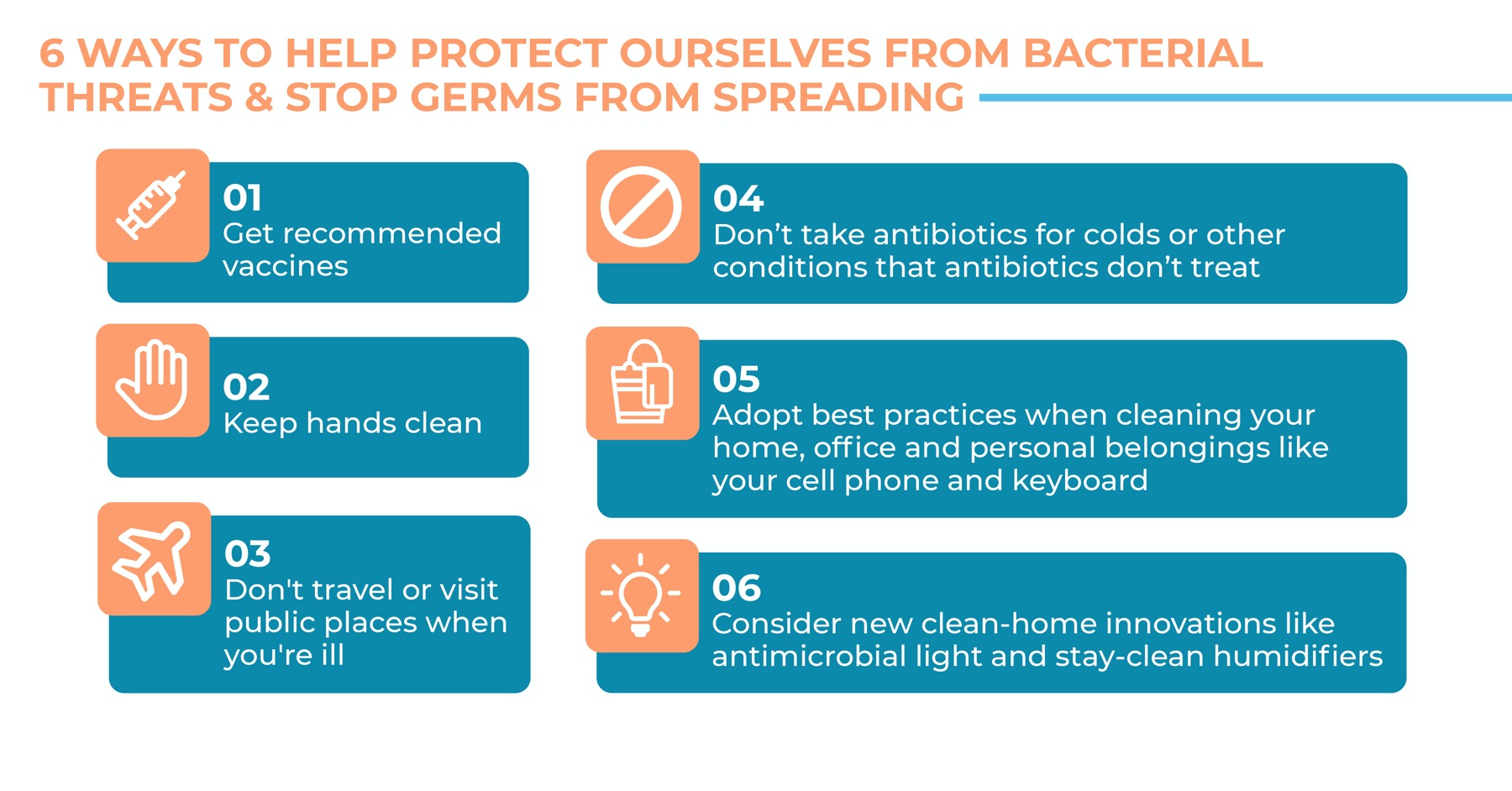 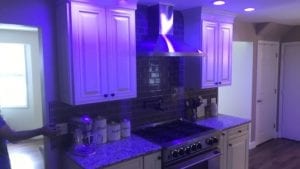 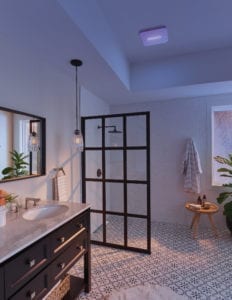